Part of TBB’s curriculum is to have students present a culminating project about a topic researched over the span of Thailand, Cambodia, and India. My friend Eva and I decided to focus on Sexuality, Relationships, and HIV/AIDs. It has been interesting to interview villagers in Don Jiang, Thailand about their exposure to sex ed in school and their openness to homosexuality. In Cambodia, we learned that Buddhists believe that homosexuality comes from too much greed. Interesting….

In India we have focused on gender-based violence as well as arranged marriage issues.

In India, I have been teaching the cutest boys some Maths and English. Yeah, in India they call math maths. These boys are so eager to learn! We have played hangman about countries and colors and animals. We have played addition, subtraction, and multiplication games with simple numbers like 10 and 4. Here is a picture of the boys 🙂

We also were lucky enough to go to Agra, Uttar Pradesh this past weekend. This is the place of the Taj Mahal. We learned a bit of the monument’s history. The king of the Mogul Empire, Shah Jahan, had a wife who he loved so much that when she died giving birth to their 14th child, he decided to build the prettiest shrine as a graveyard for her tomb.

I cant believe I am heading back to the States in just 10 short days. Bittersweet!

Before taking off for Delhi, I had a moment of sudden realization. I realized that I had no idea what to expect, going into a country populated with 1.2 billion people. Just from seeing Slumdog Millionaire, I had a bit of an idea. India has surpassed anything I could’ve ever imagined. I am staying at a host family about 30 minutes away from the school that I am volunteering at called Vidya Papparanka. My host family is Sikh, which is so interesting to learn more about. At school, I have been teaching 6 2nd grade boys maths and english. They are so eager to learn, and for that im eternally grateful. I feel so in my element – and cant believe that in just over a month I’ll be reunited back with my family and saying bye to my TBB sisters!

What a week it’s been! On the 25th, we had to say goodbye to our beloved host families. My host mom, Mae, began tearing up as we hugged goodbye. I will miss her so dearly! Our host brother even took off work that morning at the chicken coop to say goodbye to Dylan and I.

We spent 2 very quick days back in Chiang Mai, then headed to the beautiful country of Cambodia!

Here we have visited:

Wow! That was a long post. More to come for the month of November… New Delhi bound in just 48 hours! 🙂

A few days ago, we went to an elephant farm. Here, we rode elephants bare back (which is much better for their spines when compared to riding a saddle). In the morning, we practiced getting on the elephants, which definitely took time! Then we took a walk down a scenic path through the village, had lunch, then trekked in the jungle and through the river with our elephants. Mine was named NoNing – she was precious! Then, we got to get into the river and wash off our elephants. They were such friendly creatures! It was a day I’ll truly never forget.

Just got done with a solid 3 weeks in Ban Don Jiang, Thailand. Don Jiang is an organic agriculture village. I stayed with my Mae (mom), Paw (dad), and PiLong (older host brother) in their home. My host family grows rice, cabbage, mangoes, guava, papaya, and they also have two cows! Truly every part of their farm is sustainable – they use the manure from the cows as a natural fertilizer on the fields. No pesticides necessary!

I had such a blast learning a little more Thai and also staying with such friendly, smiling people. I will miss them so so so much.

I am back in Chiang Mai until Sunday – then off to Cambodia to tour the Angkor Wat Temples!

The girls took a trip to a drag show in Chiang Mai last week. During a cowgirl number, the lead ‘singer’ came into the crowd, took me onstage, and had me dance in front of the whole audience. It was incredibly embarrassing, but also amazing. I have photographic proof! These ladies were workin it all night long. Bucket list item crossed off! 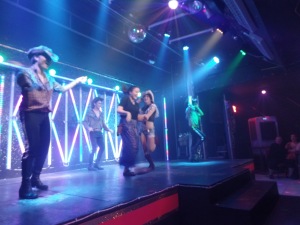 Pi Jiab took this wonderful photo. In Thai, ‘pi’ means older. Pi Jiab is our thai language teacher and translator, and she is so much fun to hang out with! She always captures the moment with a photo.

Pi Wat, a woman working at UHDP, was nice enough to go to a market and hand pick 7 of these Thai hats for us. The girls and I have decided to wear these hats all the way home. We are excited to see how airport security will treat us with these on :p

What an amazing 5 days it’s been here at UHDP. UHDP stands for Upland Holistic Development Program. We have been learning about seed germination, how seed banks work, and have also fed pigs, chickens, and catfish on the farm. On Saturday, we will be heading to Don Jiang, Thailand. This is where we will be meeting our homestay families! Don Jiang is a scenic place – with rice fields stretching out for miles on end.

I’ll be in Don Jiang for a full 4 weeks! If you don’t see a blog post for a month, that’s why :). Can’t wait to show pictures and share memories!

Here’s some pictures of UHDP: 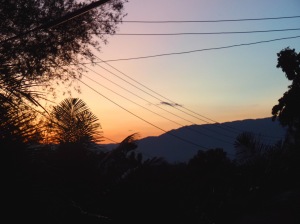 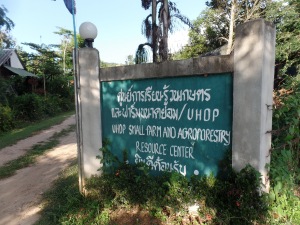 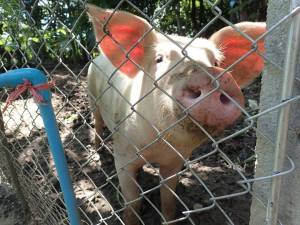